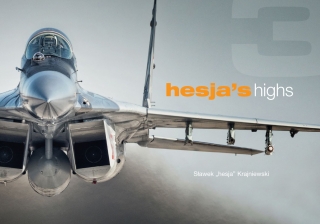 “hesja’s highs 3” it’s a third edition of the album with aviation photography made by Slawek “hesja” Krajniewski. The photographs contained within the album have been taken mostly between 2013 and 2014. During this period hesja attended almost 50 aviation events, covering more than 80 thousand kilometers in search of his flying models!

Album traditionally contains over two hundred unique aviation pictures and more than twenty excerpts of hesja’s reports from the aviation events, during which the photos were taken. What is more, the album also contains 21 tips regarding the photography technique needed to take similar pictures! Everything is beautifully presented! The book is a precious publication, aim of which is to not only to reach aviation enthusiasts, but also to inspire those who haven′t yet woke up the passion.

Ladies and Gentlemen!
It is a pleasure for me to inform you that the „hesja′s highs 3” album (also English version!) is available to buy! ALSO beyond the Polish border! :)

After submitting the form transfer the amount (album price + shipping) to my PayPal account: poczta@hesja.pl.
[Better use "Send money to friends and family" option then "Pay for goods or services" because of big PayPal charges]

Album will be shipped after the payment is on the account. The date of shipping will be consulted with you individually.

Should you have any questions regarding „hesja′s highs 3” - don′t hesitate and drop me a line: poczta@hesja.pl